One may ask, “What is the spell of mass destruction”? We shall take our background study from Acts 8:9-11 “But there was a certain man, called Simon, which before time in the same city used sorcery, and bewitched the people of Samaria, giving out that himself was some great one:

To whom they all gave heed, from the least to the greatest, saying, this man is the great power of God. And to him, they had regard because that of a long time he had bewitched them with sorceries.

From that story above, before the coming of the real gospel to Samaria, there was a certain man, called Simon, which before time in the same city used sorcery, and bewitched the people of Samaria, giving out that himself was some great one.

However, why the situation is so pathetic is that men and women who are using sorcery to bewitch the people are dubious that they go by the titles, Apostles, prophets, or pastors.

Irrespective of the names they go by, one thing common is that they bewitch the towns and cities where they found themselves with sorcery.
However, because they use the bible and answer Apostles, prophets, or pastors which made people to be deceived.

Like it happened in the city of Samaria in which all the people gave heed, from the least to the greatest, saying, this man is the great power of God. And to him, they had regard because that of a long time he had bewitched them with sorceries.

In other words, while Simon was using sorcery to bewitch the people, yet people of Samaria mistook him that the man is the great power of God.

Read moreDealing With The Root Causes Of Failed Marriages.

Like it happened in Samaria, the same way it is happening in various towns and cities where these sorcerers are operating?

One pathetic thing about these sorcerers is that even some genuine Christians are falling under their bewitchment and spells. Are you sure that you are not under such a spell and bewitchment?

Men and women who are under such spell and bewitchment, they lose their sense of reasoning. They do unimaginable things at the command of such sorcerers that go by the title pastors.

Mostly men and women who run after miracles are their victims as they prefer to follow such men more than they are following some real and genuine men of God.

Remember what was said of the people of Samaria who was said to have given heed to Simon the sorcerer, from the least to the greatest, saying, this man is the great power of God. And to him, they had regard because that of a long time he had bewitched them with sorceries.

The actions and activities of men and women (sorcerers) that go by the title men of God or pastors are many on the internet. Their victims turn out to behave like zombies in their hands.

If not, what will you think about a South African Pastor who makes Church Members to Eat Grass, or to Drink Petrol.?  Apart from eating grass, the same South African pastor makes members swallow live snakes. 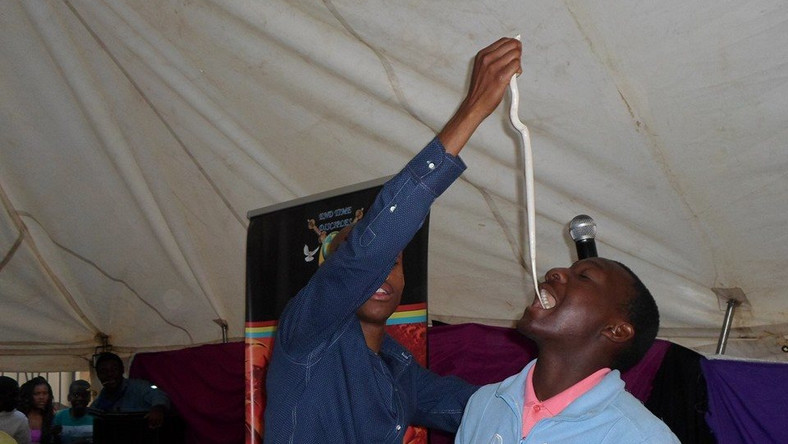 It is not only in South Africa, but a Ghanaian sorcerer that called himself a pastor also makes church members drink his bathwater.  Read  Also

Men and women who are under the bewitchment and spells of these sorcerers, trying to talk sense into them are an effort in futility. In fact, they will see and regard you as an agent of the devil that wants to prevent them from worshiping God.

For instance, in the same South Africa, angry Youths burn down church of South African pastor who makes members swallow live snakes, eat grass. The youths burnt his church thinking that his congregations will scatter.

Do you know that the sorcerer that calls himself a pastor decided to go to a forest to set up his so-called church and the people he has bewitched followed him to the forest?

We can see that in the case of one of the sorcerer turned pastor by name Mnguni who went for a deliverance exercise at the Synagogue Church of All Nations (SCOAN) in Lagos.

Another way is to get any of your loved ones that have falling victims of the bewitchment and spell of the sorcerers to be delivered.

Unless masses that have come under the spells and enchantments are delivered, they will surely be destroyed together with the sorcerers.

Rather than been destroyed by these spells of mass destruction, try to revoke and release yourself from its hold and you will be free. Until I come your way again, remain blessed.

Beware: The Spirit of Jezebel Is in Operation in Our Society Part 2. Discourse With The Married

Understanding And Enforcing Our Redemptive And Covenant Rights In Christ. Part 1. Discourse With The Married

Being Totally Set Free Indeed By The Truth. part 2. Discourse With The Married

Thank You To The Audience Of Destiny Moulders. Discourse With The Married

Personal Responsibility: A Stepping Stone To A World Of Success And Marital Breakthrough. Discourse With The Married

Translate Destiny Moulders To Your Language

Please Connect With Us On:

Visit The Achieve Of Destiny Moulders

This website uses cookies to improve your experience while you navigate through the website. Out of these cookies, the cookies that are categorized as necessary are stored on your browser as they are essential for the working of basic functionalities of the website. We also use third-party cookies that help us analyze and understand how you use this website. These cookies will be stored in your browser only with your consent. You also have the option to opt-out of these cookies. But opting out of some of these cookies may have an effect on your browsing experience.
Necessary Always Enabled
Necessary cookies are absolutely essential for the website to function properly. This category only includes cookies that ensures basic functionalities and security features of the website. These cookies do not store any personal information.
Non-necessary
Any cookies that may not be particularly necessary for the website to function and is used specifically to collect user personal data via analytics, ads, other embedded contents are termed as non-necessary cookies. It is mandatory to procure user consent prior to running these cookies on your website.
SAVE & ACCEPT

You can find out more about which cookies we are using or switch them off in settings.

This website uses cookies so that we can provide you with the best user experience possible. Cookie information is stored in your browser and performs functions such as recognising you when you return to our website and helping our team to understand which sections of the website you find most interesting and useful.